skip to main | skip to sidebar

Many of my friends, during their college days longed for a chance to stay away from home. Many envied the guys who used to stay in hostels. Hostels, as they put it was the ideal place to lead their own life in their own way. It has been an year since graduation, and I still maintain a healthy relation with most of my friends. The voices which always longed for freedom has subsided. The prospect of spending a week at home enthralls them, more than anything. Many are longing for a transfer back to their home town. The reason being "Home Sweet Home".

Over the last one year I have been away from home for over 7 months now. I spend each day thinking of when can I go home and spend some time with my parents. I lost the job at Siemens, the only positive I took from it was, the very fact that I could spend sometime with my parents at home. Might sound preposterous, but i mean it. It was four jobless months, and my parents often bore the brunt of my depression and wild mood swings. They were inspiring, supportive and kept me going. My parents were happy that I was staying with them for so long, after a gap of 3.5 months.

I had an interesting telecon with one of my friend, a practicing lawyer here in Mumbai. He was wondering when can he spend his time doing nothing like those days during our summer vacations in school. Watching movies, reclining on the couch. He plans to write a book and perhaps if it clicks, he would quit his job and spend his time at home on his 'couch'. The message is pretty clear. It is neither laziness, nor love for easy money. It is the longing for those days of 'bliss and solitude' . Those were the days, when we were all free birds. No tensions(except for those exams), no big thoughts, no humongous responsibilities.The thought process, might seem very comfy, or to rephrase, a longing for an easy life with no hard work. It has nothing to do luxury, nor a longing for easy money. The point in contention is that the best days of our life has gone by, and we are all now part of this fiercely competitive world.

My brother has moved to Chennai as part of his job, and I am in Mumbai. My parents have fallen into those category of parents who have both their children away in different places. News of my brother or me coming home for leave makes them happy. After all, I believe these are those little moments of happiness that we as sons or daughters can give our parents.I had some plans for going to Bangalore to visit my friends during the first week of October. My mother asked me, if you can come to Bangalore, why can't you come to Kerala. I was in  dilemma. I had to make a decision. After days of deliberation I decided in favor of my parents.

I had been home for onam for about ten days. I came back to work at Mumbai, and the very next day I called my parents and told, when shall I come again. Maybe I am home sick or whatever you may call it. Now I have booked my tickets to go home again on the 25th of September for another ten days.

Dear All,
This is my third mail in a span of one month regarding the reunion. It has been disheartening that some of you didn't even show the courtesy to reply.
'Senti' apart, I wish to remind you that the farewell in all likelihood can take place either on 4th September or 5th September. Will Sent an invitation mail stating the venue and further details by the end of this month.
Hope you are all doing good.
Hope to meet you all soon.

This was the mail I had sent to my batch mates on August 4,2009. The lack of response to my previous mails had coerced me into using the tried and tested methodology, "Senti". The response was far better this time around. Numerous phone calls, group sms 's etc were made to reach out to the 65 odd students of GECB, EC 04-08. The turn out on the d- day was a paltry 16, 15 guys and one girl.

To quote a friend, "Reunions are a forum to show off how much you have attained since graduating". The comment, though debateable, was one of the reason for a lower turnout; other being the busy work schedule. My frustration over the minimal attendance, has resulted in me starting on a negative note. 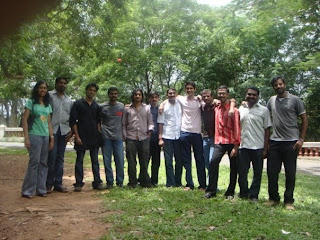 I spoke to couple of my friends enquiring whether they would turn up. I ended every call on the same note, "even if nobody turns up, we can meet, after all it has been an year".

Kanakakkunnu Palace, Trivandrum was the proposed venue. The scheduled time was 12.30pm. I reached the place at 12.40pm, late as always. I parked my bike and walked to the palace, and on the way, I met four of them. We got together, the chatting and the pleasentaries ensued. We were waiting for the rest of the lot (though we were not sure who all would be coming). One by one they started trickling in, and the attendance crossed my anticipation of 10. There were more coming and finally we were 16. A sense of achievement dawned on me. This number was far beyond my expectation.We spent some time at the palace grounds talking about our work, hair loss and weight loss (I seriously believe hair loss is an issue intriguing the younger generation now). 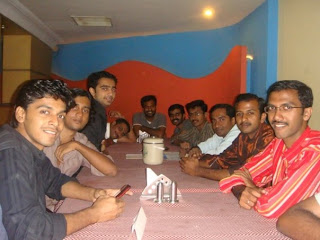 Time was flying by and we were hungry. We had to decide on a place. Sindhoor palace, came up, but was rejected. Taj, Park Rajadhani too came up, but was rejected too. We wanted to be in a place where all of us could sit together and eat. Going for a buffet would mean just the opposite. After lot of discussion we decided to move to Hotel Indrapuri, at Vazhuthacaud.

At Indrapuri we demanded that we could all sit together. They agreed to make the necessary arrangements. Little did we expect them to arrange a table in the 'BAR'. We were confused on whether to take the place or not. There were objections to the idea, but we could convince them quite easily. Ramya, the lone girl, and many others perhaps had their first experience of having lunch from a Bar.(Reminds me of the words from Malyatoor's Verukal, "Pattar pattapakal patta adichu!!!"). Ordering the food was next on the agenda and Jikku took the onus. He would shout the name of the dish and we would raise our hands like school children. It was more than half an hour before the food was served. We had lots to talk about, and finally the food arrived. It was already 2.30pm and we ate like pigs. We had finished our meal, and ordered juices. Then came, Vivek, who had took the effort of driving all the way from Kollam to Trivandrum just to attend this reunion. Kudos to his commitment.
We settled the bill and moved out. At the exit we posed for more photos, bid farewell and left the hotel.

This was a reunion which may serve as a launching pad for more such reunions in the coming years. We had delibrated on the feasibilty of a yearly reunion, but nothing came of it. One keynote about reunions is, it can be an ice breaker. It can act a forum wherein our old grudges can be laughed off. Over the years we may get more busy with our work and stuff, but the fact remains that the memories can't fade off. I am looking forward to arranging more such reunions in the upcoming years.
Posted by Sandeep at 5:41 PM 8 comments: